“Mei, I heard some shooting in the distance when I went out hunting close to the cave,” Shan informed me after his hunting trip.

He didn’t come back with anything of course…..he is quite useless. I don’t even know why they send him out to hunt when he can barely aim at all.

“They must be close to us,” I answered frantically. “I am going to go and keep my eyes out just in case,” I continued.

“Mei you know that you are not allowed to……your father has already told you that a thousand times,” he pulled me towards my house.

“I am capable of anything a man can do…..I’ve done this a millions time already anyway,” I huffed while getting out of his hold and sprinted towards the cave.

Our village is surrounded by mist…..so that the stupid president Huang can’t find us. That’s what Nana Fern told us. She knows everything that happens in our village and she can see what will happen before it even happen. You could say she is the Sharman of our village.

The only way people can come through to our village is through the cave not far from my house. The cave is almost like an opening or a door way to our village.

But the cave is also covered by the mist…..only a certain people can see the cave and of course the chosen one that will help us get our country back from Huang. Well, that’s what Nana Fern told us anyway.

I’ve left the village a couple of times….which is outside the cave….the other side of the world. I went out to see what it’s like out there, but I always stay close to the cave of course.

I’ve seen some of Huang people come really close to the cave once….very close but they couldn’t see anything because of the mists.

So Nana Fern was right in away about the mist protecting us and all. We don’t exactly know how many tribes are out there like us……hiding from Huang.

I’ve grown up from our small village, I don’t know what it’s like out there and I don’t really want to find out. I only want to keep my father safe and my people save.

Nana Fern has also told us the legends about the lost King and princess. She said that the King is still out there somewhere waiting for the chosen….the chosen one that will free us all.

I don’t know where this lost king is and I don’t know why he is waiting for this chosen one or whatever…..as far as I know we might never be able to return to our country at all.

I mean I’ve been waiting for nineteen years now and this lost king still haven’t return. Also, this chosen one hasn’t shown up either.

I know Nana Fern is right about most things……but as I got older I am starting to doubt whether the lost king will ever return at all. I mean who is this chosen one anyway.

I have almost made my way out of the cave and to the outside world now.

I could hear gun shooting not too far from here. Shan was right….they really are close to the village. I climbed up the rock near the stream quickly and quietly.

No one knows this spot…..from up hear I could see the whole view that is surrounding this area. The sound of someone grunting and running through the stream made me snapped my head towards it. 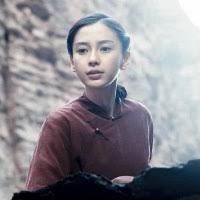 But what surprised me was the fact that he is making his way towards me. Towards the cave…….Can he see the cave or is he just walking around anywhere without knowing where he is going?

I could clearly see what this man look like now as he stands right under where my hiding spot is. His got a light brown hair, well-built body and well a very…. very pale skin. Also….his sense of clothing is very strange.

I could see that the known male is breathing in and out heavily. I didn’t know what to do…whether to shoot him or keep watching him to see what he will do next.

Apparently he doesn’t work for Huang because he was running away from Huang’s man. What could he be? Where is he from?

As I tried to change my hiding position so that I could see the unknown strange male’s face, a loud splashing sound made me looked over the male again.

There he was laying there flat with his face facing the water, and only now I’ve notice the blood surrounding the man's body twirling around with the water.

This unknown male is wounded.

I quickly jumped of the rock and raced towards this unusual man. I turned his body around so that his face wasn’t in the water anymore.

I pull him to shore inside the cave and checked his pulse whether this man is still alive or not. The big blood stains on his lower abdomen indicate that this man has been shot.

I could still feel his pulse but he was no longer breathing anymore. I quickly unfold his wet jacket and took my scarf off to replace the pressure on his wound, tighter than the way he ties it.

I have to do CPR…..teacher Jim has taught me CPR…but I’ve never applied it on human being before.

Is this man worth saving? Why do I have to save him?

I have to keep him alive and show Nana Fern who this male is. I have to save him. I got on my knees on the side of his body and pinched his nose while tilting his head.

After two lungful breaths…..I started to do thirty compressions on him but he was still unconscious. I repeat my action once more and still no movement but when I am about to give him a bit more air into his lungs for the third time he started to cough uncontrollably.

I felt relieved. I save someone. After him coughing out some water from his lungs…..he finally open his eyes and I was mesmerized his light brown eyes.

I’ve never seen anyone like this man before. He looks young and very handsome even though he is not in a good state.

He blinked wearily a couple of time and then closed it again and I know he is not dead…because he is actually breathing now. But he has lost a lot of blood and I have to get him to Nana Fern or else he will definitely die this time.

I have to safe this mysteriously attractive unknown man….

Here is the next chapter :D Please give me a chance at this story.....I promise you won't regret it....well I hope not anyway :D (Sorry if it's still confusing for you.....but I hopefully the next chapter will clear things up in Liam's P.O.V)

Please vote, comment, subscribe......I really want to hear what you guys think of this story......<3

There are currently no comments